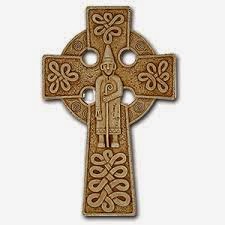 I've been thinking about St. Patrick all day, as I imagine many of you have as well.  Maybe it's the Guinness, maybe it's figuring out what you have in your closet that's green.  Maybe it's just the fun of everyone being Irish for a day that makes this such a popular holiday. But like Valentine's Day, the saint behind the celebration has gotten lost.

The thing about Patrick, of course, is that on the one hand he's been lost to us for a long time.  He lived in the 5th century, and by the 7th century people were trying to tell his story, but for their own purposes, and with precious little to go on.  And on the other hand, we miraculously seem to have two (two!) documents that are genuinely his own testimony to his life, and work, and faith.  Absolutely remarkable, really.  And, whatever we think was important to know about Patrick -- snakes (there weren't any) or shamrocks (no evidence for that one, either), even the lovely 8th century prayer known as St Patrick's Breastplate -- those aren't the things he thought were important enough to write about.

As a lifelong committed Christian, one of the more fascinating aspects of my journey has been the time spent in conversation with persons of other religions, as well as with Christians who approach our common tradition with different perspectives.  Sometimes through books, sometimes face to face, I listen and share across beliefs. And almost always, the interaction has left me both richer as a human being, and more settled in my Christian path.

There was a time many years ago when I studied yoga with a teacher whose understanding of the spiritual underpinnings to yoga tradition was exceptionally wise.  I invited her to lunch one day and asked her to be my spiritual director, someone I could turn to when I needed wisdom and guidance. Turns out, that's not how she saw her role in other people's lives, so the arrangement didn't go forward, but I continue to cherish the experience of studying, and meditating, and chanting with her.

There was a long period of time in which I was closely connected to a Jewish man, one who took the historical and cultural dimensions of Jewish life very seriously. For a while he came to church with me quite regularly.  But much of the language in the New Testament struck him as anti-Semitic, and he seemed always to feel like an "outsider," even at our regular church. His discomfort made me very aware of the sensitive nature of religious language, and the need to be alert to meanings we may not always intend.

Amma Beth Krajewski
Amma Beth is a professed and ordained member of the Lindisfarne Community, an adjunct assistant professor of World Religions, and a PhD in Theology. Amma Beth welcomes your comments and questions regarding life in a hermitage, contemplative prayer, or religions of the world. Blessings!